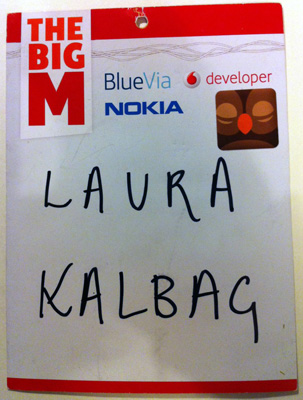 First off, let me declare my complete bias. I’ve been involved with the Big M conference from pretty early on, I was lucky enough to do all the design work and the organisers are lovely guys who I’m proud to call my friends. I’m still on a high from how much I enjoyed myself (and just about recovered from the surreal feeling of being in a place with my own design work everywhere) so this is really going to be the most biased event review you’ve ever read!

It was a complete mixture of attendees, ranging from business entrepreneurs to freelancers, mobile operators to web developers and UX experts. What really stuck out was that everybody seemed friendly, enthusiastic and engaged in the day. I didn’t spot any boring/bored looking ‘suits’ and it made for a fun atmosphere.

A great point made in Adam Bird’s review was that Komedia in Bath made for a great conference day venue as it usually hosts comedy and music events. Such a good point. The venue being a slightly dark and very colourful room made for a relaxed and informal feel to the conference. It was the right size for about 200 people so it didn’t feel over-crowded or empty at any point. The chairs were a bit hard, but I don’t think I’ve ever been to an event where that wasn’t a problem…

As a designer, and a previous attendee of the openMIC events, I usually expect most of the talks to go over my head. I’m not a big business brain, never really worked in the mobile industry and mobile development is a lot more complicated than the majority of web markup/frontend development that I do. However, this wasn’t the case at all at The Big M.

The speakers were all experienced presenters. Often you’ll find one ‘dud’ talk at a conference, but there wasn’t one here. Whilst some of the speakers presented on more controversial topics that I wouldn’t necessarily agree on, each made their points well, engaging the audience and inspiring loads of discussion in the Q and As and breaks.

Here’s a brief rundown of some of the main points (and some of my terrible iPhone photos) I tweeted from the talks as well as some brilliant tweets from @bigmconf where all the talks were live-tweeted:

Raam Thakrar –; App distribution and monetisation –; the only things more important than lines of code 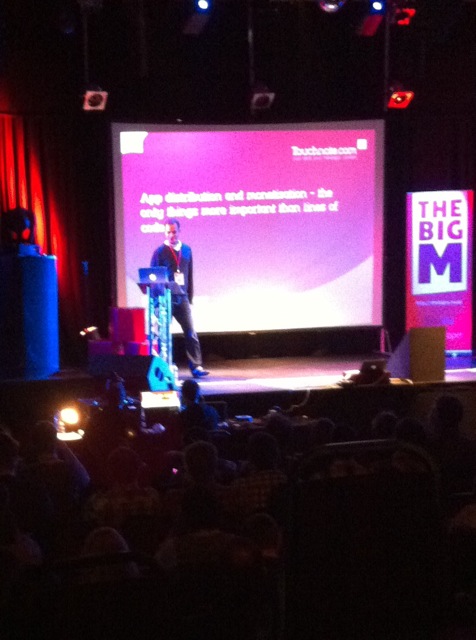 Thakrar: We need to think about why a consumer buys a phone, what part we play in the decision & how can we monetise this From @bigmconf

software and apps are now a deciding factor when people are buying handsets, so app devs should use this to work with operators

Aral Balkan –; Beyond Usability on Mobile 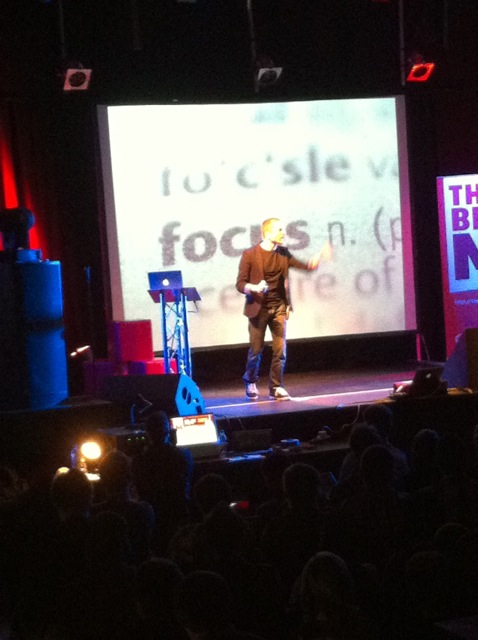 The differentiating factor that allows Apple to charge more for phones, tablets, mp3 players and PCs is user experience

Usable is akin to being edible (credited to @Cennydd and @aarron)

Common sense is a dangerous myth 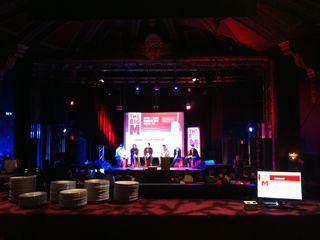 Openness: At some point you are going to die and your work is going to live on, but the only way it can do that is to be locked in From @bigmconf

Bruce Lawson –; Breaking out of the “Walled Garden”: HTML5 and open technology for mobile development 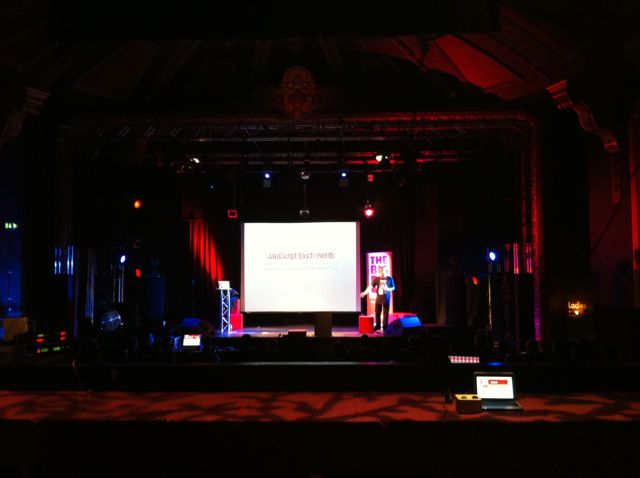 When using new web technologies, make use of them, but don’t rely on them. Always use progressive enhancement

Consider using <a href=”tel:xxx”> for linking phone numbers to be click-to-call on mobile

Accessibility isn’t just about being legal, it’s a moral obligation 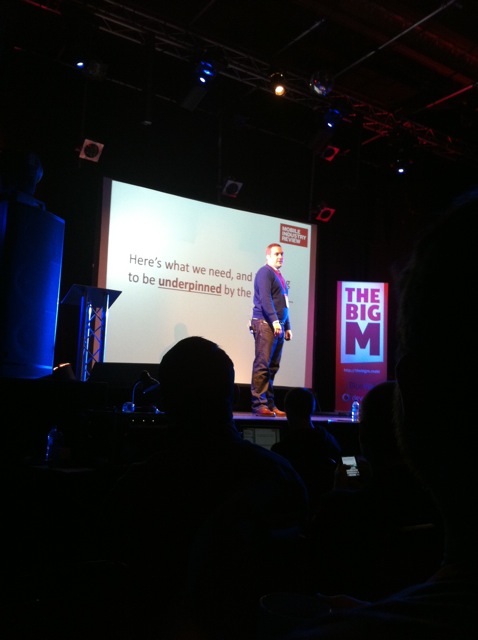 Apps being separate from the handsets and operators are barriers to the most useful mobile experiences. It needs to be seamless 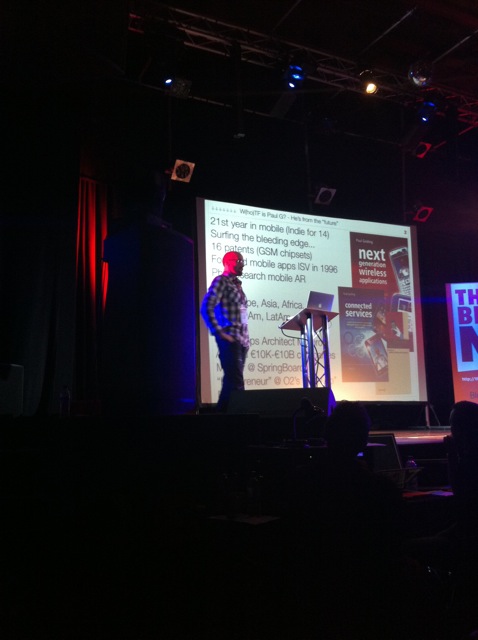 Golding: There is a myth that being first is really important. You want to be the first to win not the first to market From @bigmconf

Golding: Study what else has succeeded, what has failed, and what you can take and project out in order to innovate From @bigmconf

Golding: You need to conceive the product, choose the platform, develop the product, deliver the product and engage the market From @bigmconf

For the conference day of The Big M there was no wifi and very little 3G or Edge signal (O2 isn’t much good in Bath!) This is the second conference I’ve been to this year without wifi (the other being New Adventures) and I think it’s a great choice that more conference organisers should make.

Mike quite rightly pointed out that even when organisers pay for expensive wifi, it usually gets overloaded, and is an additional cost that the attendees pay in their ticket price. I couldn’t agree more. Having so little signal meant people were talking to each other rather than being stuck to laptop screens. There was just about enough signal for the occasional tweet about the event but not enough for any anti-social so-and-sos to sit and work!

Day Two was a smaller affair, with about a quarter of Day One’s attendees returning for the workshops. I was really lucky to go to Aral Balkan’s iPhone Design Principles and half of Patrick Lauke’s *HTML5 and Mobile *before we had to head back home to Surrey.

Aral really is a talented presenter. After a quick introduction of everybody in the room, he managed to pitch a perfect level workshop helping us to understand the different development choices you have when creating web apps and native apps for the iPhone. I wrote pages and pages of notes and feel like I understand the development process so much better now (and that’s considering I’m no programmer, just a designer!)

The first half of this was a great intro to HTML5 and expanded on many of the points that Bruce made in his talk the day before. As someone who is already using HTML5 on most projects, I found a lot of the talk was probably better suited to those just getting to know HTML5 but the great explanations of concepts such as the viewport really helped cement what I already knew.

I knew Chris and Mike would run a fantastic event, and I hope this encourages more smaller and informal conferences. Conferences that freelancers can afford that enthuse, engage, feed, water and inspire. Here’s hoping there might be a Big M II… 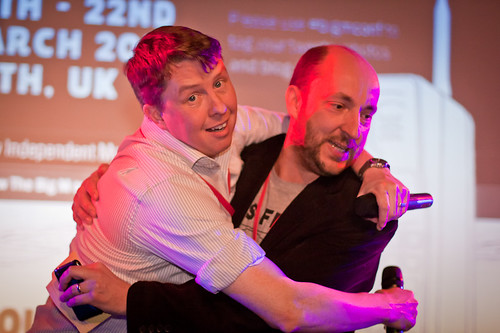